In this month’s Net Work column we ‘Reflect’ on backup software and ICT hardware that promised much but failed to deliver. Plus how Alexa has become a money-sink for Amazon, and there’s a round-up of space and energy news too.

The consumer ICT sector is littered with under-developed or half-finished products and software that land users with the job of faultfinding or debugging them, often hindered by frustrating customer support, before the product gets discontinued anyway. The term ‘Click of Death’ was coined to describe failing Iomega Zip disks or drives that were about to shred your precious data (see https://www.grc.com/tip/codfaq1.htm). I then got through three or four failing Onstream tape drives before ditching that idea too, and Onstream then went bust anyway.

Today I run the excellent, but quite involved, Macrium Reflect backup software, backing up files onto a Synology RAID-style NAS, a long-time favourite. A free version of Reflect 8 for home use is available from www.macrium.com and is definitely worth a try.

For many everyday users, a cloud drive will host data files for peace of mind and these days users are spoilt for choice. Major big names like Microsoft, Google, Synology and Dropbox offer cloud storage, and some peripheral makers like Asus and Huawei will bundle some online storage too. Amazon is however dumping its Amazon Drive cloud storage this year, and focussing on Amazon Photos instead (see https://www.amazon.com/b/?node=23943055011).

The Dash for cash

Some ideas probably fail not because the engineering was lacking but because project managers mis-read the market to begin with. Back in Net Work, July 2014 I described the Amazon Dash Wand, and then there were Amazon Dash buttons (Net Work, July 2015), pre-programmed stick-on buttons that added a product (eg laundry powder) to your Amazon shopping cart with a single button press.  Millions of these $5 gizmos were circulated but the Dash button never caught on and they were discontinued in 2019.

Other instantly forgettable ideas covered before in Net Work include the Amazon Echo Look, an Alexa-powered camera device that took snapshots of you and offered fashion tips (see https://youtu.be/9X_fP4pPWPw). The $200 device was destined for the recycle bin in 2020. As for the Amazon Astro Robot or ‘Alexa on wheels’ (Net Work, December 2021), and the 2020 Ring drone-powered security camera, well, let’s not go there.

Last year’s Black Friday shopping frenzy revealed how Amazon’s retail prices are all over the place, especially when independent third-party ‘Marketplace’ sellers are involved. A dehumidifier, listed at £169 dropped to £149 (bargain!) then rose to £189. A certain electric consumable was changing hands at anything from £40 to £65, while the Epson V600 flatbed scanner that I’ve mentioned in the past trades at anything from £285 to £399. By being prudent with pricing I saved over £100 on recent purchases which is not to be sneezed at. Even small everyday items can cost nearly twice as much on Amazon as they would on eBay, for example. The differences can be substantial and where price is a key factor, it’s never been easier to shop around. As usual, I recommend the Camelizer plug-in (www.camelcamelcamel.com) to trigger Amazon price drop alerts.

Unlike Google’s smart devices, Amazon promises to keep its Alexa-powered hardware running for at least four years once discontinued from sale, so there is hopefully life in Alexa yet. One popular range of smart devices that is in terminal decline is marketed in Britain by Hive. All cameras and security devices are destined for the chop as Hive, owned by Centrica (the name behind British Gas), has decided to focus its energies on ‘going green’ instead. More details are buried at https://www.hivehome.com/product-news. 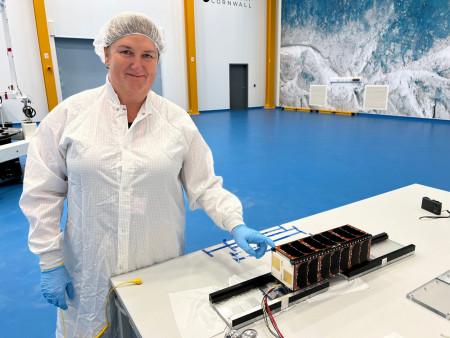 By the time you read this, we will know whether or not the first space launch from UK soil has been successful (update: the launch has been delayed). A specially-adapted 747 – the Cosmic Girl – operated by Richard Branson’s Virgin Orbit space business is set to take a LauncherOne carrier rocket aloft in mid December. An RAF pilot will fly the jet from Cornwall Spaceport in south-west England and release the LauncherOne, which will then continue its journey into orbit to deploy its payload of ‘SmallSats’. 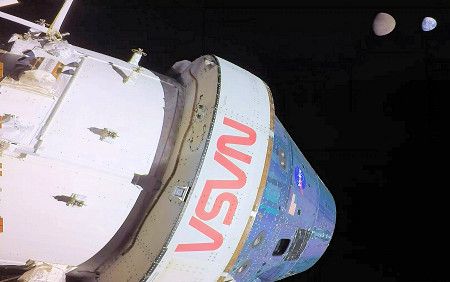 ^ Next stop Mars: The Orion capsule looks back at the Earth and the Moon after surpassing the maximum distance of any other spacecraft built for humans. Orion was scheduled to splashdown on Dec. 11th. (Image: NASA)

NASA’s ambitious Artemis 25-day moonshot mission concluded after a successful launch of the SLS (Space Launch System) on 16th November. The Orion capsule successfully orbited the Moon before heading deeper into space as the next stage of its mission, the furthest any such spacecraft has ever flown. Orion continued in retrograde orbit around the Moon before returning to Earth to splash down in the Pacific Ocean. Longer term ambitions including returning humans to the Moon and ultimately to Mars.

On the subject of 2FA (Two Factor Authentication), my thanks go to reader Alan Pickwick who writes: “I always enjoy your section in Practical Electronics. I thought you could include a small piece warning users to set their phones NOT to show PIN codes from text messages on their lock screen. See this BBC article at https://www.bbc.co.uk/news/uk-england-london-62809151 about this audacious form of theft which circumvents 2FA and allows a thief to access stolen accounts. Regards Alan C Pickwick.”  I tried my Android phone with a Paypal purchase needing 2FA and the PIN number displayed on my locked screen! I found the lock screen notification settings and changed it to ‘Show but hide contents’. The BBC article gives tips for iPhone and Android users. Thanks for the tip, Alan.

An alternative search engine to Google has arrived in the shape of ad-free Neeva, a company founded in 2019 by former Google ad. executive Sridhar Ramaswamy. In a blind test, nine out of ten preferred Neeva, they claim, and their subscription-based model is based on the idea that users will be willing to pay for a private, ad-free search engine that has no corporate influence over search results. A free service is available that provides 50 ad-free searches a month or unlimited paid-for packages cost just under £45 a year or £5.49 a month in the UK. Try it out at www.neeva.com 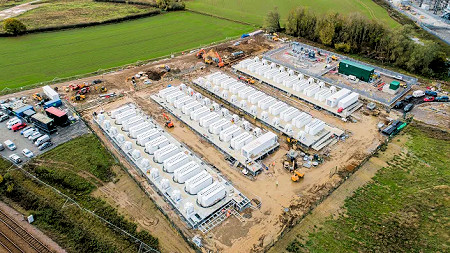 ^ A new Battery Energy Storage System (BESS) claims to have the largest capacity of its type in Europe. The new 196MWh utility  uses Tesla technology and helps to buffer Britain’s energy supplies.

What is claimed to be Europe’s largest capacity storage battery has now been energised in England by Harmony Energy. The site, near Hull, is home to a massive 196MWh capacity battery built using Tesla Megapack technology and is located adjacent to National Grid’s Creyke Beck substation, which also connects phases “A” and “B” of the world’s largest offshore wind farm, Dogger Bank, which is set to go live starting in Summer 2023. 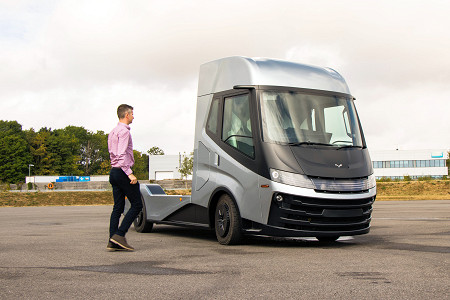 ^ An all-new hydrogen-fuelled truck has been developed by Hydrogen Vehicle Systems and is set to launch in 2025.

Shell has closed its handful of hydrogen filling stations in the UK, the electric mobility portal site Electrive reports, saying that the “prototype tech had reached its end of life”. Meantime, Glasgow-based start-up HVS (Hydrogen Vehicle Systems) has showcased a fully functional hydrogen-electric powertrain which will be using on its 40 tonne Articulated Tractor (truck cab) unit.  HVS is first to market with its state-of-the-art powertrain and will build its vehicles in the UK with its first HGV set to go on sale in 2025. See https://www.hvs.co.uk for details.

Previous Net Work columns have covered the risks of Li-ion battery fires in some depth. In November, 43 people were hurt, some very seriously, when an electric scooter battery caught fire on the 20th floor of a New York tower block (see https://www.youtube.com/watch?v=q7zNtozubmI). Some landlords now ban e-bikes and scooters from being taken indoors due to the fire risk. Warnings have also been issued to steer well clear of cheap electric scooters or dodgy chargers, with Zurich Insurance seeing claims for lithium battery fires tripling over three years, mostly caused by defective batteries, incorrect chargers or items being left on charge for too long, they say. Third-party batteries which can be bought cheaply online are also to blame.

Ionetic, a UK-based startup that specialises in electric vehicle (EV) battery pack technology, has launched its state-of-the-art EV battery pack design platform which can cut development costs and turnaround time for EV manufacturers.  Ionetic strives to overcome the design and implementation hurdles facing lower-volume niche manufacturers and their new software-based platform can boost energy density by 30% and increase utilisation of pack volume by up to 120%, compared to existing off-the-shelf solutions.  It can also design a battery pack in a matter of days and reduce implementation costs by over 90% for auto industry OEMs. IONETIC plans to open its first UK-based battery manufacturing facility this year, which will make IONETIC the only UK-based developer offering a turnkey battery solution. More details at https://ionetic.uk/ 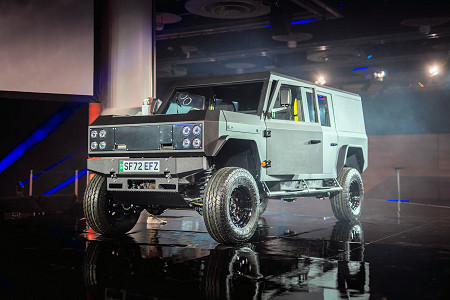 ^ Scottish-based EV builder Munro has launched its MK_1 all-terrain 4×4 EV and hopes to start deliveries in 2023.

Scottish vehicle builder Munro has released details of its new electric 4×4, the MK_1 which has an all-terrain ability and all-electric powertrain making it a candidate for sectors including construction, agriculture, mining, forestry, mountain rescue, remote infrastructure maintenance, and leisure. The fearsome-looking ruggedised vehicle has a 220kW motor, a high ground clearance and can carry five and tow 3.5 tonnes. Sales should start in the USA in 2023. More information is at https://www.munro-ev.com/mk1

Plans for a new lithium refinery in England has been given the green light. The UK’s first large-scale refinery is aimed at supplying raw material for EV batteries and rechargeables, and will greatly reduce dependence on Chinese-sourced materials. The plant in Teesside will take about three years to complete. You can read more at https://teesvalleylithium.co.uk

That’s all for this roundup – you’ll find full details in this month’s Practical Electronics magazine.