The LED Christmas tree that grows on you! 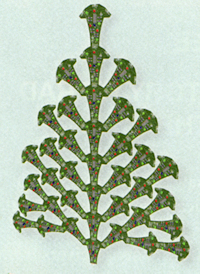 Just in time for Christmas, this seasonal LED novelty uses a specially-designed PCB that can expand and interconnect with others to form as large an LED Christmas decoration as you like. Each mini-board is 100mm high and hosts a discrete 74HC shift register d.i.l. chip controlling 8 LEDs, along with multiple connectors allowing more boards to be added. An Arduino-based test sketch is also available for free download in this month’s file. It can be controlled with an Arduino or Raspberry Pi, or with the USB Digital and SPI Interface Board also in this issue.

USB Digital and SPI Interface Board

This low-cost project uses a PIC 16F1455 micro, which incorporates a USB interface, to drive up to seven digital outputs and one input, including three used for SPI communications. It could be utilised to control the LED Christmas Tree project as it has an SPI-compatible interface. In standalone mode, it can generate random patterns to allow the LED Christmas Tree to be used without a computer. 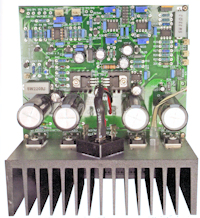 This adjustable bench PSU delivers all the power you’ll need for developing or testing projects – the linear supply can deliver up to 8 amps (@16-45V continuous) or up to 50V at lower currents.  The variable voltage, variable current project has low ripple and noise and has a digital display. Inside it uses a 500VA toroidal transformer. This month the largely through-hole PCB construction is described.

This simple and cheap device displays five different readings on an LCD screen: two voltage values, two current values and a temperature reading.  It has many uses but is mainly designed to replace multiple panel meters. It can also be used as a small additional text screen for a PC, Raspberry Pi or any other computer with USB. PIC micro based, with source code available for free download.

This project generates real electrical power from scrap or salvaged parts, adapting a universal or stepper motor for use as a generator. And did we mention, it uses an old exercise bicycle? The prototype generates 12V and drives 90 Watts of LED lighting. In Part 2 this month, the electronics is described that adds instrumentation and conditions the power output.

Building on earlier instalments, a stand-alone gadget that displays accurate GPS time on a novelty ring of colourful LEDs is described this month.

Nostalgia isn’t what it used to be, they say, so this month we embark on a series describing the many practical techniques, service aids and precautions that are part and parcel of restoring vintage electronic equipment. Rather than sending something to landfill, if you have taken a nostalgic shine to restoring an old radio, amp or other piece of equipment, this series will be invaluable in offering a multitude of hints, tips and a few essential warnings, based on decades of hands-on experience. A general introduction is offered this month, before we get down to restoring a Leak Stereo 30 amplifier in Part 2.

Onwards and upwards as Max adds colour combinations to his 12×12 tricolour LED array. 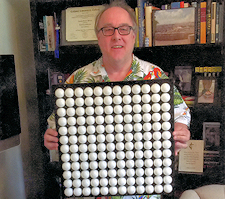 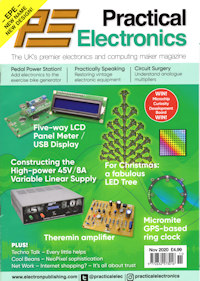