This digital display project shows the distance between the back wall of your garage or carport to your car’s front (or rear!) bumper. A clear LCD readout displays the remaining gap in centimetres and the LCD colour background works “traffic-light” style to show you when your car’s perfectly parked.

This simple but cunningly effective alarm unit is designed to warn you when hotel (or cruise ship) personal safes have been opened without your authority. It also registers the event to alert you afterwards, and it may also frighten off a suspect thief. 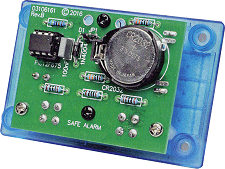 The small coin-cell powered module contains a light-dependent resistor that detects light falling onto the alarm (eg when a safe is opened), and then a simple code must be keyed in within 15 seconds or a piezo buzzer will sound. Two LEDs show activation and log an unauthorised opening. Adjustable entry and alarm periods. Also suitable for cupboards, drawers, desks etc. or anywhere that you wish to monitor by detecting a rise in ambient light levels. PIC 12F675-powered, free .hex file downloadabe from our website.

This spectacular Stereo VU Meter will give your stereo system some LED bling! It uses 80 high-brightness SMD LEDs to produce a highly colourful dual bargraph display that simultaneously shows the average audio signal level plus peak level. And it can display ranges up to 100dB.

Part 1 this month describes the circuitry, with constructional details following in next month’s instalment. PIC 32MX-powered with free .hex code available for download if you want to program your own. 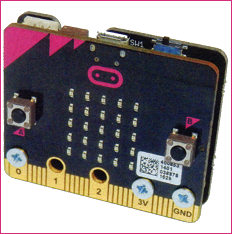 A fantastic new Teach-In series launches this month, with Part 1 of Teach-In 2017 introducing the BBC micro:bit single board computer.

In Part 1 our Teach-In tutor Mike Tooley outlines everything you need to know to get started with the BBC micro:bit, looking at on-board features and pinouts,  followed by a walk-through of the various programming environments that are available. Our first worked example is a compass that utilises the micro:bit’s onboard magnetometer.

More audio amplifier tricks and tips from our audio expert: this month, designing and building the power supply section. 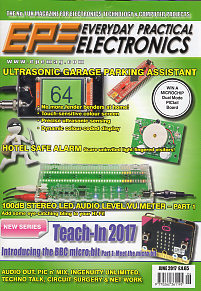