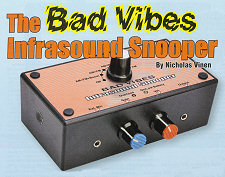 Just as the ultrasonic squeaks of bats are inaudible to the human ear, low-frequency sounds such as the rumble of a wind turbine can pass undetected as well. 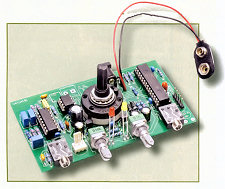 Back in March 2014 we published the Infrasound Detector for low frequency measurements. Now you can ‘listen’ to low frequency vibrations using this Infrasound Snooper. It frequency-shifts and amplitude-modulates by about five or six octaves a frequency range of about 1Hz to 20Hz, so you can actually detect and ‘listen’ directly to low-frequency sound created by wind turbines, generator equipment or even animals such as crocodiles and elephants.

This fast-acting circuit operates in near real-time and has several operating modes; AM+FM or AM only with or without microphone response compensation, or FM only (fixed amplitude). Built-in electret microphone and external mic input are provided. PIC 32MX170-powered with free source code available from EPE– see the link to the right.

A signal injector is an invaluable way of fault-finding or troubleshooting a temperamental audio circuit, as it inputs an audio test signal that you can then trace through circuit until a problem area is pinpointed. This very handy Audio Signal Injector and Tracer project offers a 1kHz oscillator as an injector and a small amplifier to act as a tracer.

If you’re interested in AM radio faultfinding as well, then we offer an optional RF demodulator probe which lets you listen to a modulated radio signal as it goes from stage to stage.

To avoid damaging hearing or the risk of electric shock, use an extension speaker, not headphones, when dealing with high-voltage circuits. 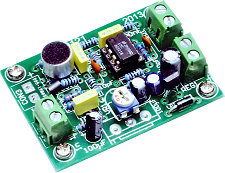 This versatile pre-amplifier project can be used as a general-purpose stereo preamp or as a dual-channel preamp with a microphone for one channel and guitar for the other. One channel can have fixed gain while the other is variable with on-board trimpot or external pot. Details of various configurations are included so you can change the gain or use with e.g. stereo ceramic cartridges for playing vinyl records.

The Dallas (Maxim) 1-Wire bus is an attractive way of exchanging data between a microcontroller and a sensor or peripheral device using just one or two wires to transmit data. In this month’s Teach-In 2016 our tutors outline ways that the Arduino can handle multiple external sensors when the number of wire connections is limited 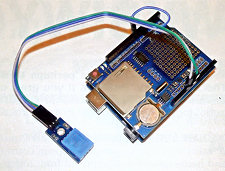 The ins and outs of utilising SD memory cards with Arduino are explained, and then a versatile environmental monitor is described in detail. Various humidity and temperature sensors are highlighted along with typical spreadsheet data capture. There’s plenty of hands-on practical programming to do, so don’t miss this great feature for Arduino fans everywhere! 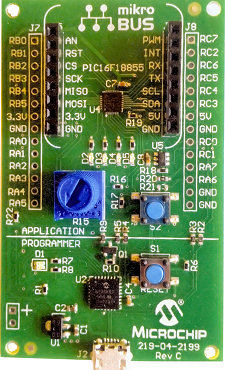 PIC Microcontrollers and the PIC Kit 3: a beginner’s guide (Part 1), exploiting the new Microchip MPLAB Xpress cloud-based IDE. This is the first of a series of primers aimed at beginners wanting to get to grips with PICs for the first time.

Using friendly, easy to follow language our PIC expert explains the differences between PICs, Arduino and Raspberry Pi. If you want to learn how to utilise these incredibly fast and powerful devices, be sure to follow PIC n MIX starting this month. 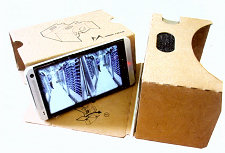 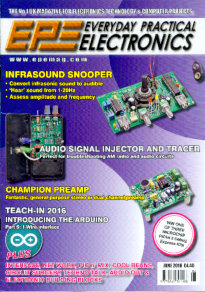