Used in conjunction with your frequency counter (10MHz or so), even if it’s built into your digital multimeter,  you can boost its performance to measure into the gigahertz range.

A frequency divider selector has ratios 10:1 through to 1000:1 which enables the RF Prescaler to interpret higher frequencies and display them accurately on a lower-frequency counter.  The design is good for measuring frequencies of 6GHz or more.

The Micromite LCD BackPack (described in the May 2017 issue) is a low cost single board computer programmed in BASIC and, thanks to its low-cost LCD touchscreen, it can be dedicated to interfacing and controlling many systems. The original Micromite BackPack has been a huge hit but it does require an external USB-serial converter before you could load and run programs. A PIC32 programmer is also needed to load or update the MMBasic firmware.

Version 2 of the Micromite Backpack described this month does away with these disadvantages. It includes both the USB/ Serial interface and PIC32 programming capability in a single additional chip, dubbed the ‘Microbridge’, described separately in EPE this month.

The Microbridge has been created as a tool for use in conjunction with the Micromite family of products but it can also be used as a standalone PIC32 programmer and/ or a USB/serial converter for other processors such as Arduino or Raspberry Pi.

Thanks to the Microbridge, Micromite enthusiasts can now add this functionality onto their Micromite, and of course they can also utilise the new Micromite Backpack V2 which incorporates these desirable features. 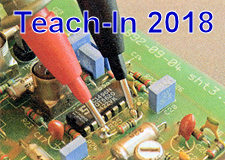 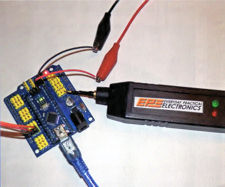 In the penultimate part of our Teach-In series, our tutors describe how digital data can be read, captured and analysed. Basic logic truth tables are included along with typical discrete logic family parameters. Finally a handy logic probe is also described that you can build yourself on stripboard. If you’re keen to explore the basics of digital logic, Teach-In 2018 is the place to be! 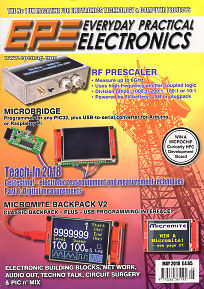