This handy piece of test gear will measure Inductance from 10nH to over 70mH, and Capacitance from about 0.1pF to over 800nF. It is based on an ingenious measuring technique and delivers surprising accuracy in a unit that is straightforward to build. Dual-line LCD display readout. Uses a PIC 16F628, programmable with free source code available from our Library.

If you have a stereo amplifier without a headphone socket but want to listen to your music via headphones, then this versatile project is for you. It connects between your amplifier and loudspeakers, has several operating modes including Mute, and features two output sockets with individual volume controls. Ideal for our 20W Class-A Stereo Amplifier Module described in October 2008 EPE.

This professional quality design helps motorists to drive for optimum performance. It indicates clearly when best to change gears, and as a bonus it incorporates a Rev Limiter which throttles back the fuel injectors. The dimmable display consists of 4 LEDs, with three of them indicating shift points plus a fourth for the Rev Limiter. 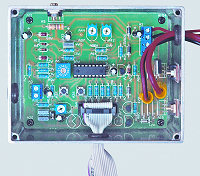 Also suitable for competition use, intended for installation by advanced auto-electricians and skilled enthusiasts. PIC16F88-I/P microcontroller based using free source code available from our Library.

The use of this device may affect your car insurance policy

Dedicated to offering salvaged parts a useful second life, this month we show how the convex lenses from projector-style car headlights can be re-used as a mega-powerful LED hand torch (flashlight) or adapted further to make a broad-beam bike light.

Also in this month’s jam-packed issue: 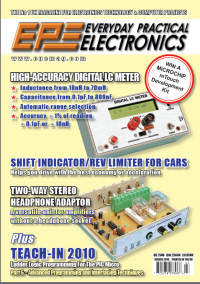