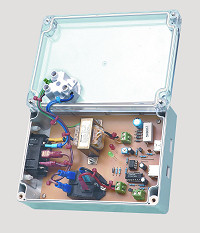 This useful accessory powers up your computer peripherals automatically and powers down devices when PC sleeps. By monitoring a USB port, it detects activity and turns other mains-powered accessories on (or off, when your system hibernates). Configurable for either desktop PC or laptop operation. Main relay output, straightforward 555 and TTL design. As usual, all constructional details are included in full colour along with full photography enabling you to construct this design with confidence.

This popular type of project is ideal for wireless remote control of practically anything within an open range of 200m or so.  The transmitter is PIC 12F675-powered and sends a burst of radio signal with the press of a button, or, when an external signal triggers it. Absolutely no power is consumed by the transmitter in between times. The receiver also uses a PIC 12F675 chip. A pair of pre-aligned 433MHz modules are used meaning no set up is necessary, and up to five different channels may be used to prevent interference from neighbouring systems. 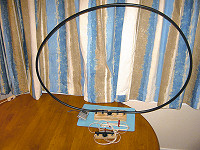 This simple passive MW loop aerial works well indoors and is easy to construct. The weak signal enhancing performance was found to be absolutely outstanding.

This mini dot-matrix scrolling LED display started as a car dashboard display, but can be used in any measurement or data logging application where 9-12V d.c. is available. Monitors up to six signals, eg speed, fuel, battery, cabin temperature, ECU data, and displays up to 10 computed values in a scrolling or static readout, on its 7 x 15 dot matrix LED. Two output channels for relays or buzzers, data logging is performed via USB upload to a PC.

In Part 2 this month, details of construction and software installation are covered. In Part 3 next month the software is described in depth.

Our widely praised tutorial series lays bare the workings of the diode, Zener diode and basic power supplies, and how to use light-emitting diodes correctly. 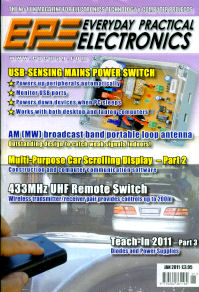