This month’s roundup of technological trends investigates the worrying problems of lithium battery fires, ponders whether (and how) to upgrade to Windows 11 and spells out What3Words can do for you. 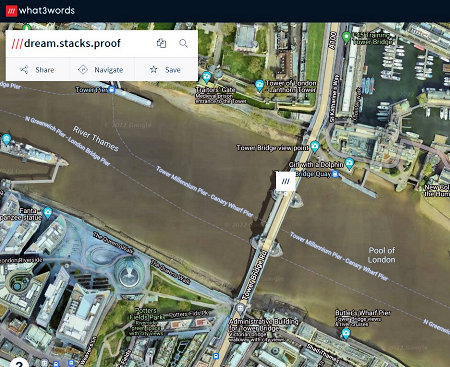 ^ What3Words uses easily-digestible words to describe any location on the planet. London’s Tower Bridge is described here in the desktop version.

This month’s magazine column opens with a look at What3Words, the London-based geolocation service that enables users to pinpoint an address by using three easily-digestible words. The firm has divided the globe into a grid of 3-metre squares, which they decided was the resolution needed to enable an area the size of an entrance or a car parking space to be pinpointed accurately.  The system is future-proof, because even if buildings or addresses change over time, the same three words will always describe that same geographical location on the globe. 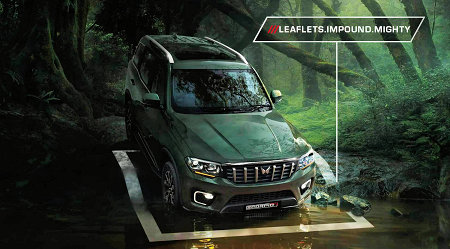 To make a start with What3Words, an app is available for mobile use that will generate the three-word string, but it can also be used offline with GPS providing the three word location without reference to a map (see the guide at https://youtu.be/_JBwRxjCq-k).  If you have no mobile phone signal, though, you would need another means (radio, landline) to communicate those three words in order to summon any services. The website https://what3words.com enables desktop users to zoom in to any address on a map and the three words will be displayed. Both map and satellite layers are available and a typical house might cover ten or twelve squares, so you can almost pinpoint your sitting room using What3Words.

A word or three about logins

The use of three whole words is also suggested as a way of managing personal passwords. It’s becoming increasingly pointless to use random character strings like 3hroY7h0#_67, which is a login that can’t be remembered and will probably end up written on a Post-It note somewhere.  A nonsensical passphrase could be created by stringing three words together, such as poachedeggssalt22 or gardennettleweeds56. At least they are more human-friendly and usable, and no more likely to be hacked than any other combination of characters. Britain’s National Cyber Security Centre (NCSC) explains the rationale of using three random words this way, at https://www.ncsc.gov.uk/blog-post/the-logic-behind-three-random-words.

The use of biometrics and two-factor authentication (2FA) is increasingly replacing the need for passwords altogether, though. In China, facial snapshots are increasingly used as a means of payment verification: Facial-Recognition Payment (FRP) or ‘Scan the face to pay’ systems can look up your picture on their database and complete a transaction within 10 seconds. (The Nielsen Norman Group published a case study of FRP two years ago at https://www.nngroup.com/articles/face-recognition-pay)

As a regular web user I’ve relied on Roboform for many years to manage several hundred web logins. Roboform Everywhere starts at $17.90 a year and a free version is worth trying. Readers can visit Roboform.com for more information. 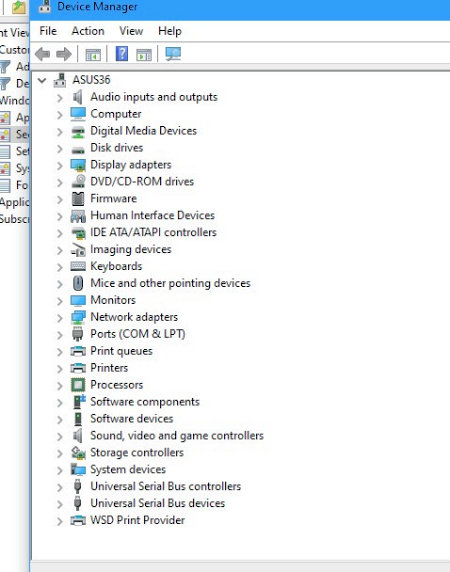 (Above) Before and (below) Device Manager after a BIOS update, which ‘enabled’ an onboard TPM2.0 module on the author’s PC, allowing a Windows 11 upgrade.

This month I describe how a BIOS update on my home-brew PC initialised its built-in Trusted Platform Module.  But for now, I’ve reverted back to the older BIOS: I’m happy to sail along with a PC that stubbornly refuses to upgrade to Windows 11. A lot of useful info is at the Asus Windows 11 FAQ https://www.asus.com/support/FAQ/1046215/ that will help users of other brands. Check this month’s Net Work for more practical hands-on advice.

One born every minute

At about the same time, I also applied the ‘three words’ idea to one of my POP3 mail account logins and then I hit a problem with my PC sounding the Windows ‘Balloon’ sound, every minute, on the minute.

Running Process Monitor (see https://docs.microsoft.com/en-us/sysinternals/downloads/procmon showed Windows’ inner workings in real-time (no clue there), and Windows’ built-in Event Viewer displayed Windows logs and error messages (ditto). I sorted it eventually, but the cause wasn’t what I thought it would be, as I describe in this month’s column! 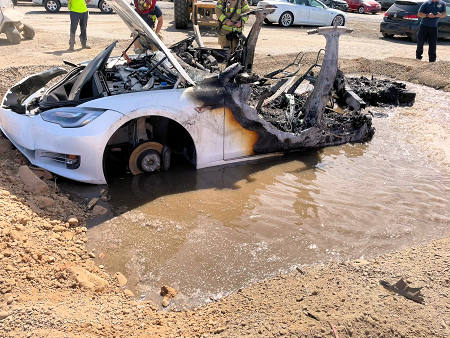 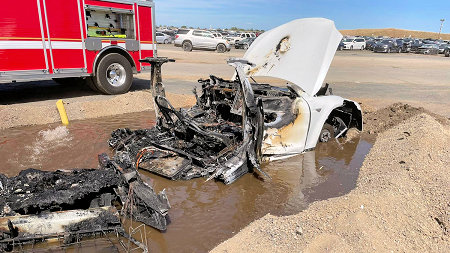 ^ A crash-damaged Tesla EV ignited three weeks later while stored in a California scrapyard. There was nothing left of the damaged Tesla as firefighters struggled to extinguish the battery fire. (Images: Sacramento Met. Fire/ Facebook)

I devoted a major part of this month’s column to highlighting some of the serious risks posed by electric car (EV) batteries and e-scooters, which have been the cause of a number of potentially catastrophic meltdowns and fires.

I found footage of a burning bus  incident a reader highlighted on YouTube at
https://www.youtube.com/watch?v=peT72jWHXfM.  These intense battery fires seem to start spontaneously and large-scale fires seem to be virtually impossible to deal with, other than by letting them burn themselves out.

I went on to report some recent incidents involving Tesla cars. A news report claimed that a new Tesla Model S caught fire just a few days after delivery. The driver struggled to get out of the car (the doors wouldn’t open) and he had to force his way out through the door to escape. The fire needed ‘copious amounts of water’ for over two hours before it was finally extinguished. The CNBC news clip is at https://www.youtube.com/watch?v=t2adVW6bTkQ. In May this year, a Tesla owner in Vancouver had to break out of his car, again by kicking the windows out, when the car suddenly stopped working and smoke filled the cabin. A report is at https://www.youtube.com/watch?v=dQxm6n7SdvE.  YouTube is full of electric vehicles burning out: in the five minute video at https://www.youtube.com/watch?v=Le6KNI9YsH0 showing an EV charging bay, at 0:30 seconds the sound of escaping gas (presumably from the battery pack gassing) escalates before fire breaks out (note the intense blowtorch effect on several sides), which ultimately destroyed three vehicles. 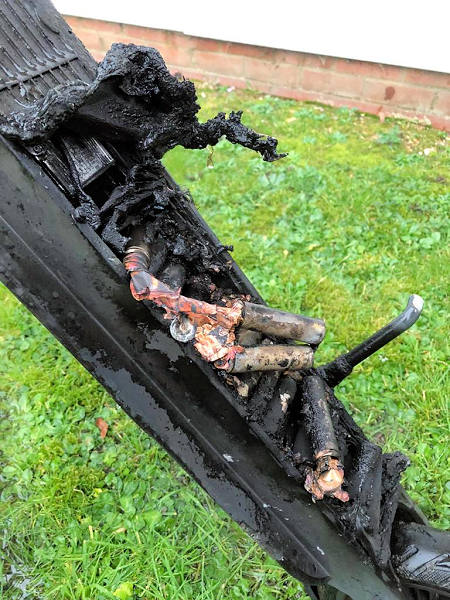 ^ An e-scooter battery ignited without warning while stored in a community area of an apartment block in Essex. (Image: Essex County Fire & Rescue, England)

British Customs authorities have long confiscated imported e-scooters that have fake safety certification or non-compliant batteries or chargers. In January an e-scooter, stored in the communal area of a block of flats in Harlow, Essex, England suddenly caught fire. A passer-by took it safely outside, but the outcome could have been much worse if the e-scooter had been indoors: that’s exactly what happened later on in June when a fire on the 12th floor of a block of flats in Shepherd’s Bush, London, broke out and wrecked the apartment. An e-scooter had overheated and caught fire while being charged.

In the Shepherd’s Bush fire, a new system called ‘999EYE’ was used that enabled callers to live-stream video straight into the Fire Brigade’s 999 control centre (999 being the UK equivalent of 911).  999EYE was developed by Capita and West Midlands Fire Service (see https://www.youtube.com/watch?v=8E-DVij0km8) and it sends a link to the caller’s smartphone which starts the camera. The streaming video helped firefighters to assess the risks that might be involved.

Because of the fire risk, lithium batteries have become a major headache for the airline industry too. Hence there are severe restrictions on what batteries and equipment air passengers can ‘carry on’ and what can be checked into the aircraft hold. For visitors to the USA, FAA advice for travellers is at https://www.faa.gov/hazmat/packsafe/more_info/?hazmat=20 while UK travellers and visitors can check the Civil Aviation Authority rules at https://www.caa.co.uk/Passengers/Before-you-fly/Baggage/Items-that-are-allowed-in-baggage/.

For some battery applications, Sheffield-based Faradion may eventually offer an alternative to lithium power sources. Their sodium-ion batteries are an emerging technology that promises to be safer than lithium cells and offer a higher energy density, and, since they can safely be discharged to 0V, they can be transported more easily with no risk of thermal runaway. Sodium-ion batteries might ultimately prove ideal for static storage or back-up power uses or small mobility applications like e-scooters.  There is some outline information at www.faradion.co.uk.

In other news, owners of Land Rover Defenders could benefit from a new drop-in kit made by Electrogenic that converts these rugged 4×4 diesel workhorses to electric power. The conversion kit, aimed mainly at the agricultural sector and landowners, has been in development and extensively tested over the past 18 months. This very interesting company also specialises in converting old classic cars to EVs. The conversion will become available towards the end of this year at a cost of £24,000 + VAT. More details at https://www.electrogenic.co.uk/cars/land-rover-defender-agricultural.

Check this month’s edition of Practical Electronics for more details!