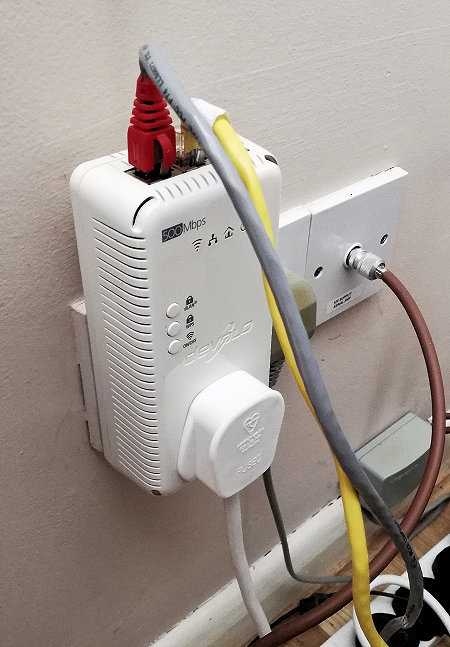 ^ Devolo powerline communications (PLC) can extend Ethernet and WiFi via the mains electricity  to places where WiFi might not otherwise reach. Other brands are available.

This month’s Net Work looks at ways of improving Internet access around the home, starting with a reminder of the benefits of powerline communications (PLCs) such as the Devolo range that I still use to provide a network connection through the electrical ring-mains, to areas where Wi-Fi or Ethernet can’t reach.

PLC adaptors can also be handy for providing Internet access to devices having Ethernet ports but no Wi-Fi, such as some smart TVs or personal video recorders. PLC networking is especially useful in older homes having thick walls or metallised insulation that block wireless signals (a problem also faced by smart meter installers), but PLC ‘broadband-through-the-mains’ requires ‘clean’ electrical circuits for best performance. 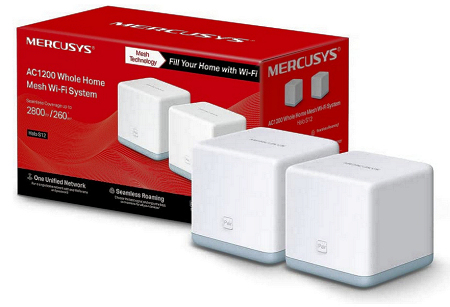 ^ Can this cut-price Halo S12 whole-home mesh system from Mercusys really work? We find out this month! (Below, right) Connected via a TP-Link switch to the router 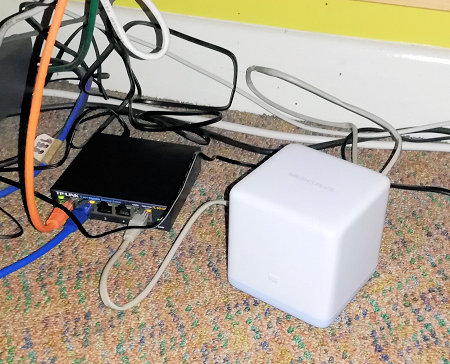 Obviously, the trend is rapidly towards Wifi coverage, and as a way of upgrading an existing home network, I look at a whole-home wi-fi mesh system that sounds too good to be true! Can a £20 whole-home mesh system from a little-known brand be any good? I tried it out and was pleasantly surprised. Check out the range at https://www.mercusys.com/uk/

This month’s column also reminds about some popular jargon used to specify WiFi routers or mesh systems, so if you don’t know your AC1200 from your AX5300, Net Work explains what to look for when choosing a WiFi router.

The UK’s BT (British Telecom) sells a range of Whole-Home ‘discs’ that works with any broadband supplier, they say. An online survey can help you choose the best BT solution, see https://shop.bt.com/brands/bt/whole-home-wi-fi.

Many internet users still use Email client software based on their PC, especially if they have a busy work/ life workload. Email client software is fast to use and you can store your email database on your own system rather than relying on a third party like Gmail or Outlook. This month there’s an update on the latest email clients, plus news on one of the best Email programs ever produced.

Try the latest version of Thunderbird  V102 available from https://www.thunderbird.net.  It is free to use but they will tout for a donation.

If you want a modern, private alternative to Thunderbird and your web browser then consider the Vivaldi browser, which is available for Windows, Mac, Linux and Android. Oslo-based Vivaldi places a strong emphasis on user privacy and anti-tracking, and the Vivaldi web browser now has a built-in Email client called Vivaldi Mail 1.0 which manages multiple Email accounts with ease. More details are on https://youtu.be/bNU8cZbqDGU or you can visit https://vivaldi.com/press/releases/vivaldi-mail-1-0-calendar-feed-reader-launches/.

Other worthy Email clients include well-respected The Bat! by Ritlabs which is described as a secure desktop client for Windows. A trial is available from https://www.ritlabs.com/en/products/thebat/

The writer still uses arguably one of the best Email client programs ever made – Eudora.  Originally sold by Qualcomm, Eudora has many productive functions that are hard to beat, including a fast database search, templates and unmatched mail filtering features, useful as I have a massive Email database covering business and personal use. It is miraculous that an old program born in 1988 and last released in 2006 operates at all under current versions of Windows, but operate it does, even if installation does need a little initial juggling. Many dyed-in-the-wool Email users still swear by Eudora, and it was a major blow to learn that support for Eudora 7.1 was cast adrift when the program was finally shelved in 2006.

Today, the beloved email program has just a few glaring problems, including poor handling of HTML Email and an inability to deal with UTF-8 character encoding used by many modern Email programs; I’m used to seeing garbled  punctuation like  â€˜goodâ€™ ­instead of curly quotes.  The colourful history of Eudora is in an excellent article at https://computerhistory.org/blog/the-eudora-email-client-source-code/

In 2018 Eudora’s source code (freely donated by Qualcomm) was picked up again and renamed ‘HERMES Mail’ as a kickstarter project. The current version, which is basically Eudora 7.1, can be fetched from https://sourceforge.net/projects/hermesmail/ along with a patch for OpenSSL.

A new indiegogo campaign for a Mac-compatible version is now under way (as Eudora was initially a Mac program), and readers will find up to date news at https://www.indiegogo.com/projects/hermes-mail-8-0-the-final-stretch#/.  I hope to get an early look at HERMES Mail 8.0 as I feel it’s a hugely significant alternative to Gmail, Outlook and Thunderbird.  I’ll continue tracking developments, so watch this space!

In mid July the first images from the new James Webb Space Telescope were released by NASA and they observed previously unseen stellar nurseries and obscured stars.  Many previously uncharted sights and breathtaking images await us as the Webb Space Telescope peers into the universe farther than any human have ever done before. Many online resources are available at https://webbtelescope.org/resource-gallery

Elon Musk’s SpaceX continues to lob 54 Starlink satellites at a time into low earth orbit. My computer colleague has installed several Starlink satellite systems for UK clients and he’s been amazed at the extremely slick setup and installation each time. At the time of writing Starlink in the UK costs £89 per month with £529 setup. Visit https://www.starlink.com/map for coverage. 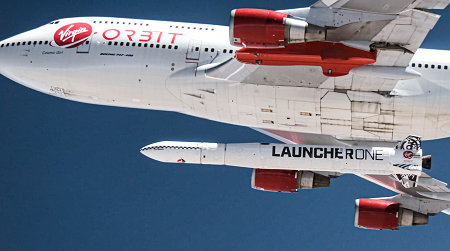 ^ A LauncherOne space vehicle carried by Virgin Orbit’s 747 ‘Cosmic Girl’ can take off from an ordinary runway and propel satellites into orbit. A maiden flight from Cornwall Spaceport is due this year.

Britain’s first active spaceport in Cornwall, south-west England, will see the maiden flight of Virgin Orbit’s UK launch later this year. The 747-based launch will carry six satellites including the ‘DOVER’ pathfinder satellite in an underslung rocket launcher.  DOVER will transmit an ‘innovative new signal to provide data from space that can be used on the ground to obtain a position or an accurate time’, it’s claimed – the precursor to Britain building its own independent space-based navigation network using Positioning, Navigation and Timing (PNT) techniques instead of beaming GPS (or Galileo) data earthwards.

“When it comes to getting off the ground, we contribute to the work of others rather than taking the lead ourselves” wrote Britain’s Boris Johnson in the 2021 National Space Strategy, so a successful launch would make the UK the first country in Europe to launch satellites into space from home soil this year, one of the Government’s key ambitions.  The UK is fast positioning to become the key European satellite launcher.

The maiden flight from Cornwall will carry the first satellite constructed in Wales, and Boris Johnson also reminded us that “Neil Armstrong’s journey [to the moon] would never have happened without the engineering know-how of a chap from Anglesey [in Wales] named Tecwyn Roberts – we have for too long failed to properly embrace the opportunities that the space industry offers.”  You can read about the Welsh space flight engineer at https://en.wikipedia.org/wiki/Tecwyn_Roberts 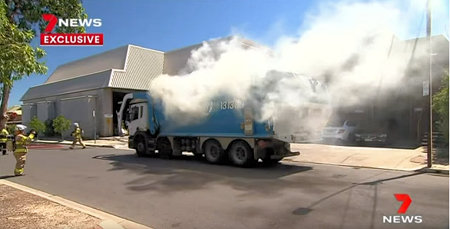 ^ A refuse vehicle caught fire, caused by a battery being crushed in the compactor (YouTube/ 7News Australia)

Householders are being warned of the dangers of discarding rechargeable batteries, or gadgets containing them, in with their domestic waste. Several garbage trucks caught fire and suffered thousands of pounds’ worth of damage when rechargeable batteries were crushed by the compactors, and battery fires also occurred back at the waste depot when batteries set fire to piles of waste. See the Australian 7News report at  https://youtu.be/nNBTE-XzzYU for example.

If you fancy a quick break from desktop drudgery, you might consider some of the casual games offered by Big Fish Games. They are graphically rich, clean fun for family use and not too demanding to play, so there is likely to be something for people of all age groups. I found some old Big Fish titles from 2006 and installed them in Windows 10 and, remarkably, they worked perfectly 16 years later. Free trials are available from www.bigfishgames.com.

Check this month’s Net work column in Practical Electronics magazine for more news and trends from the technological world!