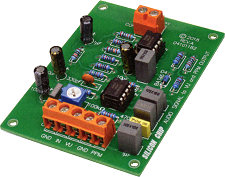 This 10-LED display will enhance many projects or audio circuits and can provide a linear, log, VU or PPM (Peak Program Meter) display. More configurable and efficient than legacy LM3914-type designs, this versatile design can respond to AC or DC input voltages (from 583mV to 55V) and uses readily-available components. You can also choose your preferred colour and shape of LED, and it suits both surface-mount and through-hole types of LED.

Earthquakes can strike anywhere and even here in Britain we have had the odd earthquake or two over the years. With the focus on trying to obtain as early a warning as possible, this Arduino-based project uses an accelerometer as a sensor that can trigger a piezo sounder to warn of possible earth tremors. 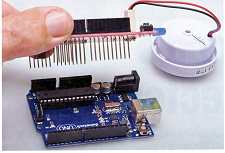 It’s cheap and easy to build and might have other applications as well – with the increased use of fracking (hydraulic fracturing) for gas and oil extraction, it could monitor local ground disturbances and alert nearby residents, or it might find other uses in volcanic areas or regions prone to landslip.  A self-contained Li-Ion solar-power supply is also described which makes the project entirely self-contained.

This new series is devoted to getting to grips with the extremely powerful Micromite, a tiny PIC-powered, BASIC-programmable microcontroller device that punches way about its weight (and height).  In Part 2 we get hands-on with practical details of the Micromite Keyring Computer (MKC).  It’s so simple to build and can form the heart of many sophisticated projects in the future.

In association with Soundtronics.co.uk this month we have a real treat for analogue synth. fans with a ten-page bumper article describing the construction of the power supply and sections of the main MIDI Ultimate PCB. This superbly-written series contains everything needed to build this synthesiser with confidence by anyone having moderate soldering skills. Plenty of friendly helpful advice and encouragement is provided in this series, so be sure to check out this exciting design and see what it can do for you.

This nifty RF Detector module from Banggood can measure the power of RF signals from 1MHz to 8GHz over a range of 60dB. The device is based on the Analog devices AD8318 chip and some applications are explored in this month’s feature. 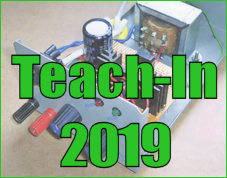 Our popular Teach-In tutorial series continues to examine the principles of power supply circuit design and operation, this month turning attention to switched-mode power supplies (SMPS).  More efficient and smaller than simple regulated designs, an SMPS is becoming increasingly the choice to power many smaller projects and is commonly used in mains adaptors (wall warts).

This month’s Teach-In outlines various forms of SMPS and follows up with a practical project: a switched-mode boost converter. A useful feature on proper fuse selection is also included – quick-blow or slow-blow, we explain which fuse offers the best protection for your projects.